Nassau County has seen a spike in opiate-related deaths in recent years. Massapequa, Massapequa Park, and North Massapequa saw 20 deaths as a result of a heroin overdose, the most in Nassau County. The map below shows the number of opiate overdose caused deaths in by community from June 2012 to June 2014.

The heroin problem has grown to epidemic proportions. Since 2004, the opiate-related death toll has continued to rise from 52 to 174, prompting the requirement of all first responders in Nassau County to carry Narcan, the opiate antidote. 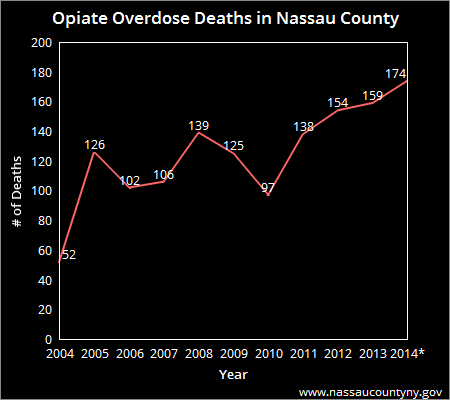 In an effort to decrease the number of deaths, Nassau county has been holding Narcan training for civilians. Eden Laikin is on the Nassau County Prescription Drug Misuse and Abuse Committee. She said the combined number of deaths in Nassau and Suffolk Counties last year, is equal to one a day.

“Which basically means that, some family’s going to wake up tomorrow, to the discovery that their loved one is, yeah, dead from an overdose,” she said.

“Narcan, the drug that brings you back from the dead. We’ve started administering, we’re having trainings almost every week now, and that’s beginning to pay off, because this is a global problem,” he said.

The next training seminar will be held Wednesday, Jan. 27 at 7 p.m. in Glen Head. To RSVP, or to find a Narcan training near you, visit www.nassaucountyny.gov.